AZ (Japanese: AZ) is a mysterious recurring character in Pokémon Resurgence. He is the former king of the Kalos region and the creator of the Ultimate Weapon.

Three thousand years ago, AZ loved his Floette dearly. A war broke out in Kalos, and that Pokémon went to fight in the war, where it was killed. The man received the body of his beloved Pokémon some time later, and out of unspeakable grief, he built a giant device to restore it to life. He succeeded, but he was unable to overcome his despair, reconstructed the device into the Ultimate Weapon, which he used to wipe out many lives and bring the war to an end.

His Floette, having discovered the truth behind it returning to life later left him, unable to see the Trainer it once knew. Feeling regret for what he had done, AZ took to traveling to find Floette to start their relationship over to make amends for his mistake.

The group finds documents in Lysandre Labs that reveal more of AZ's story: he had a younger brother who wished to claim Kalos out of his own greed. After AZ ended the war by launching his weapon, his brother realized the error of his ways and sought to make amends for his actions by burying the weapon in an attempt to prevent it from ever being used again.

He makes a minor appearance early in the season. He mutters about "the flower Pokémon," then leaves.

He appears once again much later, being held prisoner by Lysandre in the lowest levels of Lysandre Labs. When he is found, he explains the story of Kalos's history from three thousand years prior. Lysandre reveals that AZ's name is the same as the king from three thousand years ago, and that he had the key to the weapon around his neck; Lysandre has taken him prisoner and claimed the key in order to use the weapon to destroy all of humanity except for Team Flare.

In XYZ136, after the Ashe's group defeats Lysandre once and for all in the Team Flare Secret HQ beneath Geosenge Town, AZ — now freed from his prison — approaches and thanks them for stopping the weapon from being used again.

In XYZ37, AZ approaches Ashe and challenges her to a battle, wishing to learn about what a Trainer truly is. After the battle, AZ smiles, thanking Ashe for freeing him from his long torment, thus fully revealing that he is indeed the man from his story. Then, he sees a sparkle in the sky. Having sensed the liberation of AZ's heart, his beloved Floette — who was granted eternal life alongside him three thousand years ago — finally returns to him. AZ collapses to his knees, overjoyed that his Pokémon has finally returned.

Having eternal life, but not eternal youth, AZ has aged well, having long white hair. His expression is usually dark and grim, being haunted by the memory of the travesty he caused in the past.

Most of AZ's clothing is stitched-up; AZ wears a wool orange hat, a teal scarf, a roughed-up gray jacket with a sweater underneath, a pair of jeans and makeshift boots. AZ also wears a key around his neck, with a red gem engraved on the center, as well as black fingerless gloves, a large backpack and a metal knee cap on his left leg.

He is said to be over 9 feet (3 meters) tall due to the influence of the Ultimate Weapon's power on his body which made him immortal.

AZ is a dark and brooding man. He cares dearly for his Floette, but cannot seem to have a heart with because it was his only friend, and it went missing. 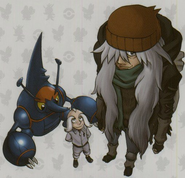 Retrieved from "https://pokemonfanon.fandom.com/wiki/AZ_(Resurgence)?oldid=262478"
Community content is available under CC-BY-SA unless otherwise noted.