Ash's Lucario was a Pokemon Ash caught after the XY Series in the Orange Islands. He became one of Ash's most powerful and battle-tested Pokemon.

Ash found Lucario as a Riolu in the Orange Islands after his parents were murdered by Team Rocket goons. Ash took him back and raised and trained him. Eventually Riolu evolved into Lucario; thanks to Ash and his strong affinity in Aura, Lucario was able to unlock his full potential far surpassing that of typically-trained Lucario. Lucario became even more powerful through the power of Mega Evolution, brought about due to his strong friendship with Ash.

Lucario enjoys battling a lot, much like many of Ash's most powerful Pokemon, such as his Charizard and Greninja. Due to his gruesome past, Lucario adopts a very serious and no-nonsense attitude, though he maintains a sense of humor and is relatively friendly with kids such as Bonnie. He maintains a strong sense of loyalty and care for his Trainer Ash, though he does not hesitate to voice out any disagreement with Ash. 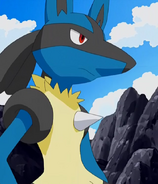 Add a photo to this gallery

Add a photo to this gallery
Retrieved from "https://pokemonfanon.fandom.com/wiki/Ash%27s_Lucario_(Mega_Evolution)?oldid=269039"
Community content is available under CC-BY-SA unless otherwise noted.