He helped aid Emerald's Unova party with his offensive attacks and above average defense against his teammates' weaknesses. His iconic Aura Sphere can be used as rapid fire ranged attacks and a full powered charged attack. He makes use of his Metal Claw move whenever he needs to battle at close range. He uses Copycat as a trump card whenever his battles go south as an element of surprise and uses Extreme Speed to quickly defeat his opponents while they're still in shock.

Before getting caught, Riolu was usually shy and reserved around new people and Pokemon; which included every Pokemon that Emerald has caught. But over time, he began to gain more confidence after battling the Aspertia Gym Leader and one of the workers in Virbank Complex.

After evolving, Auran's self confidence has boosted to the point where he doesn't rely on others' help as much as he used to. Though he still gets flustered and blushes hard (mainly from Vixen's flirtatious teasing). 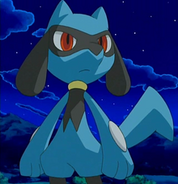 Add a photo to this gallery
Retrieved from "https://pokemonfanon.fandom.com/wiki/Auran?oldid=538741"
Community content is available under CC-BY-SA unless otherwise noted.