In Pokemon Journey: The Series

Bea made her main series debut in Solitary and Menacing!. She first battled the Karate Master at the Fighting Dojo in Saffron City and won. Soon after, she was challenged to a World Coronation Series battle by Ash and had a two-on-two battle with him. She used her Hawlucha and Grapploct to battle Farfetch'd and Riolu and emerged victorious without losing a single Pokémon, causing her rank to go up.

Bea reappeared in a flashback in Making Battles in the Sand!.

Bea reappeared in Octo-Gridlock at the Gym!, where she was training at the Cianwood Gym with Chuck when she received a challenge to a rematch from Ash. Bea accepted, using her Hitmontop and Grapploct to battle Pikachu and Riolu. The battle ended with a draw.

A silhouette of Bea along with her Grapploct was revealed at the end of Thrash of the Titans!, revealing that she had advanced to the Ultra Class of the World Coronation Series.

She made a brief appearance at the end of Ultra Exciting from the Shocking Start! while watching Ash’s World Coronation Series match against Volkner.

In An Adventure of Mega Proportions!, it is revealed that Bea managed to reach the 30th position in the World Coronation Series, and that her next opponent in the competition will be Ash.

In Battle Three With Bea!, during the preparations for their battle in the next day, Bea is visited by Ash and Goh in her Gym, Bea takes the initiative and shows all her Pokemon in hand and Ash reveals that Riolu has evolved and his other Pokémon. Soon after, they are interrupted by Korrina who is carrying a bag of Poké Puffs and reveals to be Bea's friend. After a brief get-together, Bea reveals that her goal with this battle is to test herself and find answers from her encounters with Ash.

The next day, her battle against Ash begins, with each one using three Pokémon this time. Bea starts the battle with Grapploct who faces Pikachu, and after Ash switches to Lucario, Bea uses Hawlucha and Machamp, the latter facing Lucario in an intense battle. The battle is briefly interrupted by Leon's arrival at the Gym, but Bea and Ash soon decide to retake it to define the winner of the match.

The battle between Bea and Ash continues in next episode, during the battle Bea manages to defeat Ash's Sirfetch'd using Hawlucha and Pikachu using Grapploct. Ash then uses Lucario who manages to defeat the Jujitsu Pokémon after a tough battle.

The last remaining Pokémon on each side are Lucario and Machamp, that Bea immediately uses Gigantamax to defeat her opponent. In battle, even giving its all, Machamp ends up reverting to its original form and Machamp is defeated after Lucario uses its newly learned Steel Beam move.

After being finally defeated, Bea thanks Ash and congratulates him on his victory, saying that she hopes to battle him again, finally referring to him by his actual name.

Bea re-encounters Ash during his visit to the Stow-on-Side Stadium in order to get Allister to help Gengar achieve Gigantamax form in JN092. After a short conversation with him, Bea wishes him luck and Ash heads to the arena to train Gengar, in the next day, Bea joins Allister to follow up on the training results. Impressed by the sight, Bea remarked to Allister that it was rare for him to be helping others.

Bea has a strong and confident personality. While she shows proper discipline and etiquette in battle, Bea speaks frankly and directly, calling Korrina "weak" and pointing out Ash's openings as she sees them.

Extremely powerful, Bea was able to defeat other Fighting-type experts like Korrina and the Kanto Fighting Dojo Karate Master. Like Ash, Bea aims to win against Leon in the World Coronation Series, in order to prove herself as the strongest Trainer in the world. This secured Bea high rankings in the World Coronation Series and placed in the top thirty Trainers in the world before her battle with Ash in Battle Three With Bea!.

Despite being tough in battle, Bea has a more gentle side, like when she offered food to Pikachu and Riolu and demonstrated also in the way Bea treats Allister. Although, Allister shows a certain fear in interacting with Bea.

Like her game counterpart, Bea also has a soft spot for sweets. For this reason, as revealed later, Bea became good friends with Korrina, who introduced Bea to the sweets found in the Kalos region.

Bea has a habit of forgetting Ash's name, before knowing him only as "Riolu's Trainer" and later as "Lucario's Trainer". Despite this, Bea recognized Ash's strength and has come to respect him since their second battle. And after the conclusion of the third battle between them in A Battle of Mega Versus Max!, Bea started calling Ash by his real name.

Bea in the manga 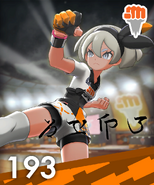 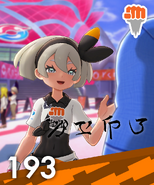