Brownie (Furret) was the first Pokemon Emerald caught in Johto and his 27th Pokemon caught/received overall. She, Leaf, Emerald, and others had trained, battled other trainers, and traveled throughout the region and have grown in various ways.

Her battle style is the usual "hit-and-run" and it's more than one variation: she either attacks using any offensive move (such as Return and/or Sucker Punch) and dodges attacks using her long body to her upmost advantage, uses Me First and then U-Turn, or uses U-Turn from the start. Either way, she fights with unpredictability against opponents who either use brute force or foes who anticipate moves.

Sentret's carefree attitude was subtle when she first debuted. She's very fond of eating berries regardless of whether or not they help heal her from status conditions, replenish stamina, etc.

Brownie later became more bubbly and full of energy due to evolution as her body grew to be more flexible. Whenever she battles against another Pokemon who fights with unpredictability, she takes it as a fun challenge to see which is more unpredictable than who. But she does follow Emerald's commands without question and is not afraid to step in whenever there's a dispute. 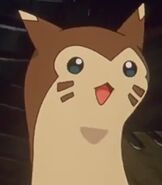 Add a photo to this gallery
Retrieved from "https://pokemonfanon.fandom.com/wiki/Brownie?oldid=539683"
Community content is available under CC-BY-SA unless otherwise noted.