At the Professor's lab

At the lab, Popplio was very similar to Ash's Greninja, often returned due to obedience issues. It liked to steal Poké Balls from its Trainer and play with them.

It first debuted in Why You Litten!, playing in a lake. It stole one of Kandalee's Love Balls and started playing with it.

The Professor ran up later, looking for Popplio. He saw it playing with the Love Ball and scolded it for stealing. Popplio dove down in protest.

Kandalee managed to bring Popplio back up to the surface with some food, and Popplio hit the Love Ball's button with its nose, catching itself.

Popplio was used in Kandalee's first Alola Pokémon Contest. She battled a Raichu and Mimi's Jynx. It evolved after winning a battle against Jessie's Gourgeist.

It evolved into Primarina after Kandalee shielded it from a Shadow Ball and learning Sparkling Aria in the process. 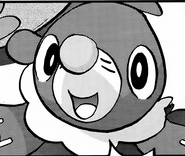