The Kenjo Region is a particularly large area south of the Unova region.

This Region, the characters, towns, gyms, and pokemon in it, were all created by 1LugiaLover (Unless adopted or otherwise). Any theivery or bad edits done shall not be tolerated, and they can and will be reported to an admin if not corrected with warning.

It is appreciated that you ask before using Kenjo Pokemon in any other game or story, but as long as credit is given, not required

PMD: Saviors Of Y/Y/T is a Pokemon Mystery Dungeon game that mainly includes pokemon from the Kenjo Region.

Unlike the other PMD games, Saviors chooses your pokemon based on gender and your finger size, as well as how much pressure you put on the DS screen.

The main plot of each game is that the antagonistic team (Dim/Bright) wishes to control the time the sun/moon is in the sky, was well as the season, throwing the region into calamity and taking over. The hero must stop them, gathering oddly typed pokemon along the way.

Rangers of the region Valor are having more and more problems with agitated pokemon. Some pokemon aren't even in their proper habitats, and are very hostile to those that try and move them. When two rangers, default names of Cobalt and Amber, arrive, it is soon discovered that in the center of the region, a tower is being built.

Pokemon that still live nearby the tower are now shadow pokemon, which have three times the size as the normal pokemon's friendship gague. The rangers must calm the the source of the shadow power, Shadow Clipsirrel, before it consumes the region.

﻿New moves in the region

﻿New items in the region

Drinks are found almost at every shop in the Kenjo Region. Depending on the type of drink you get, it may have different effects. Variables include Type, Status Condition, and Stage of the Pokemon. Some drinks only have effect when used with Fling, such as the Drowzee Drink. 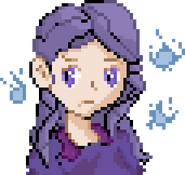 Mystique
Add a photo to this gallery

Retrieved from "https://pokemonfanon.fandom.com/wiki/Kenjo_Region?oldid=256970"
Community content is available under CC-BY-SA unless otherwise noted.