Leinad, now called 'Protectorate', is the mysterious, seemingly-dark, 16-year old leader of Team Protectorate. His appearance screams 'evil' but his actions and intentions prove him to be a hero, not a villian.

Not much is known about Leinad's history before becoming a Pokémon Trainer, other than he was friends with Natalie.

Showdown with the Shadow of Death

Leinad has an overactive sense of justice. If he witnesses any member of Team Plasma, Team Devastator, etc. mistreating or abusing their Pokémon, he will most likely swipe the Pokémon from them (If they were to try to report him, all they'd be doing is turning themselves in, and, in the instance with Lisilia, Cynthia of the Sinnoh Pokémon League, who was visiting Unova, actually vindicated Leinad's actions). This is actually how he got some of his Pokémon, such as Rook, Lisilia, and a few others. These Pokémon see him as their 'savior' and are, therefore, loyal to him.

As a trainer, Protectorate has trained many Pokémon. Having lived in Unova, Sinnoh, Hoenn, and Kanto, he has starters from each region.

Because he is mentally-linked with Giratina, he can use a variety of Giratina's abilities. He can also combine fully with Giratina temporarily, transforming him into a more powerful, although hideous, form. In this form, he can use Dragon Claw, Shadow Force, Aura Sphere, and Shining Ray.

Leinad prior to his encounter with Kyurem 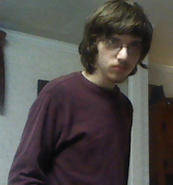 Leinad without his cloak and glowing eyes 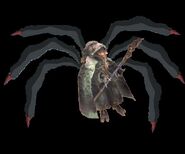 'Protectorate', fully combined with Giratina
Add a photo to this gallery

Retrieved from "https://pokemonfanon.fandom.com/wiki/Leinad?oldid=515378"
Community content is available under CC-BY-SA unless otherwise noted.