A Bunch of Regular Roleplayers like Eli the Zeratoed (Formerly Peridot XJ9), DrownedPound, The FaiyaBLAST, Darth Theoden, and Chron.

Pokémon Soras Adventures is a Roleplay based on the Pokémon Games. It started out as a regular roleplay on Planet Minecraft originally made by the user, DrownedPound, but a regular roleplayer, Eli the Zeratoed (Formerly Perdot XJ9), saw potential in this roleplay as an idea for a non-profit fan game, fan anime series (Also known as a "Fanime"), Minecraft server, and manga. Before making all of this into reality, Eli the Zeratoed asked the roleplay owner if it was okay for her to do all of this, and in the end, he didn't seem to mind and was okay with making his roleplay semi-famous.

On March 2018, DrownedPound had created the original Soras Adventures roleplay on Planet Minecraft. The roleplay to this fan Pokémon Series was originally titled "My Pokemon Roleplay" because the owner couldn't think of a decent name for it. It even has an application forum for any Planet Minecraft member who wants to join it. However, member choosing is very strict and the forum's "moderators" will only allow the finest of roleplayers. Because DrownedPound is occasionally inactive, Eli the Zeratoed is the one who moderates and chooses new members based on how good their application is. The roleplay is still going strong, but a few members had come and gone due to inactivity or life getting in the way. The roleplay application forum which has the link to the original roleplay can be found here.

Differences from Other Soras Adventures Canon

In late 2018, Eli the Zeratoed had been thinking of making a non-profit fan-made anime for the roleplay, and another roleplayer, The FaiyaBLAST thought this was a good idea too. She had been making gifs for the roleplay for a while using Flash, so it made sense to make an anime for it. On March 8, 2019, Eli the Zeratoed's Vidlii channel, ThatZeratoedWithABow, had animated and produced a mini short based on a Pop Team Epic sketch to test the anime style of animation she was going for . A few days later, the short received loads of positive feedback, and it is confirmed that there will be an non-profit "fanime" based on the roleplay in the works. It is slated to have 4 seasons with a total of 15 episodes each, and an independently animated/produced fan movie. You can find the list of all the episodes right here.

Manga and Side Comics

As the roleplay got popular, Eli the Zeratoed and The FaiyaBLAST had made lots of art for the roleplay that involved their characters in goofy poses. A few comics have been made with these roleplay characters in one-off situations not having to do with the roleplay, but instead from personal wall posts the two artists thought was funny.

The FaiyaBLAST once stated that she was going to work on a manga for the series, and Eli the Zeratoed has agreed to help her out on it. The manga will be released sometime before the anime gets made, and will be made in full color. There is no specific release date, but more details will be coming soon. However, a cover was made for the manga on June 20th 2019.

On the roleplay server's application forum, DrownedPound mentioned that it is possible for the roleplay to gain a Minecraft server (Possibly with Pixelmon on it), but he does not have a good enough Internet speed to run it properly. He ended off this confirmation with an evil laugh saying that "No one can stop him" from making it. More information will be added as more confirmation details from DrownedPound are released.

Due to The FaiyaBLAST and Eli sadly ending their friendship on bad terms due to reasons unknown, a Soras Adventures reboot called Soras Adventures Reloaded is currently in the works, with different characters and more. Though, despite this confirmation, Professor Wolftree is still the main character and Pokemon Professor of the series, but she is now 32 years old instead of 19. It is planned to have one season, and it is unknown if there will be a second one. Like the most recent reboot, Pocket Monsters 2019, the series will follow Professor Eli Wolftree, Ivan, Mirandda, and Professor Davies as they go on special assignments to help out people in Soras and beyond. The actual roleplay is much different than this and can be found and applied for on Eli the Zeratoed's Discord Server . You can find all the episodes right here. 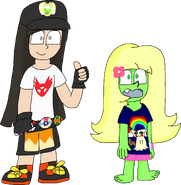 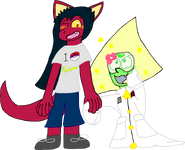 Add a photo to this gallery
Retrieved from "https://pokemonfanon.fandom.com/wiki/Pok%C3%A9mon_Soras_Adventures?oldid=451070"
Community content is available under CC-BY-SA unless otherwise noted.