Pokémon Tadoru (Japanese:  ポケットモンスター辿る Poketto Monsutā Tadoru, "Pocket Monsters Tadoru") is a fanfiction series written by Zeon1 based on the Pokémon franchise. The story adapts the planned storyline for Pokémon Aether, Nether, and Tether Versions, albeit with slight differences and modifications. It draws a heavy influence from both the Pokémon Special manga and the popular Pokémon anime series, though it operates within its own universe and has its own unique rules at play.

The story follows the adventures of Sage, a young man who travels to the rediscovered Xeno region with his partner Lucario in order to fulfill their shared dream of becoming bond masters. Along they way, they encounter and travel with a variety of other characters, such as the mysterious Celeste (who hails from the equally-enigmatic Dark Lands). They also come into contact with Team Samsara, and struggle against their plot to reawaken the region's Legendary Pokémon.

Its name is derived from the Japanese word "辿る", meaning "to follow (as in a road)".

"Young men and women ~Pokédex holders~ are entrusted with "Pokédexes" by researchers with authority. This is the story of them spending their days fighting and growing with their Pokémon!"
—Hidenori Kusaka, Pokémon Special

Ansel
Add a photo to this gallery 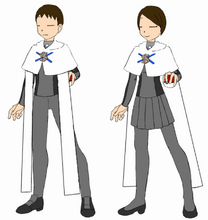 Team Samsara
Add a photo to this gallery

Professor Acacia
Add a photo to this gallery

Retrieved from "https://pokemonfanon.fandom.com/wiki/Pok%C3%A9mon_Tadoru?oldid=314107"
Community content is available under CC-BY-SA unless otherwise noted.