Raihan (Japanese: キバナ Kibana) is a recurring character in Pokémon Resurgence. He is the Gym Leader of Hammerlocke's Gym, known officially as Hammerlocke Stadium and specializes in Dragon-type Pokémon. He's also well-known for utilizing weather tactics in his battles.

Raihan is recognized as the strongest Gym Leader in Galar. He is the self-proclaimed rival of Champion Leon, and despite a losing streak of 0 to 10 against him, is the only person who has come close to beating him, having managed to knock out more of Leon's Pokémon than anyone else.

He's said to be strong enough to become a Champion if he moved to another region, but has refused to do so out of desire of wanting to defeat Leon.

While he specializes in the Dragon type, he will often use Pokémon of other types to set up weather conditions such as sandstorm and harsh sunlight. Uniquely amongst Galar's Gyms, Raihan's Gym also heavily focuses on Double Battles.

He is first seen being introduced at Wyndon Stadium, having an exhibition match with Leon who he had challenged for the Champion title. Thy both exchanges greetings and begin their match. Leon defeats Raihan to retain his title.

Raihan is a young man with light brown skin and a tall and slim build. He has black hair styled in a Mohawk, and teal eyes.

Raihan wears the Dragon-type uniform under a gold hoodie with dark blue, orange, and tan-colored accents. The hoodie has a collar that resembles the teeth of an open mouth. The sleeves end as his elbows with orange cuffs stopping at his forearms. He wears this along with dark blue-orange shoes, and as an orange hairband.

He sports a Dynamax Band around his right wrist.

Raihan is often seen taking selfies on his Rotom Phone, a habit he initially picked up to remind him of the pain of defeat, but eventually this habit spread to other parts of his lifestyle.

Raihan in the manga 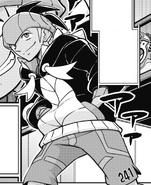