This is the first in a new Intrudgero Roleplay. The Final Dungeon, basically the PMD is falling apart so a new team is rising to keep the peace. But what exactly is the "Red Feather"? Next part = The Final Dungeon - The Chaotic Forces. Anyone can join at anytime! Just add your characters in the section below.

Inhabitants of Treasure Town - Anyone

Helios the Moltres - Anyone

Char Flamesong the TSDCharmander (Ask if you need to know what TSD means.) - Overlord Kwrpg32

Garnet: [Sighs as she looks down upon the devastation caused by the inhabitants of Treasure Town] Some Pokémon never learn...

Ice: Aren't they all like this? Origin is filled with stupidity, especially from trainers. They try to catch us. I like sneering at them, it's fun to cause pain among them, and they just fight harder, and are easily defeated because of recklessness.

Garnet: They weren't always. But times are tough...Even Wigglytuff cannot do much about it...Hey, who are you anyway?

Ice: I am Ice, leader of Team Shine. I'm a shiny Gigalith. My mate's name is Fury; she's a shiny Hydreigon, and our co-leader.

Garnet: Riiiiiiiiiiiiight, but can you explain why Wigglytuff is doing nothing about this?

Marowak: Take this! [Slams his bone into the faces of the Keckleon Brothers]

XZ: hmm............My sensors say something about the reason some Pokémon never learn.

Hydro: Not again... [Takes Marowak's bone and shatters it] They didn't do anything, Marowak.

Ice: Sensors, sensors. They aren't always right. But, what is your theory?

XZ: My sensors say that Arceus Made every different Pokémon slightly different, to build character. He once said (some never learn from their mistakes, others will learn form the past).Gosh these are better when looking for things.

Garnet: O_O now how did YOU get here? This place is getting weirder by the second!!

[The ocean shook with incredible force, for one second everyone in Treasure Town ceased fighting.]

XZ: I have detected a bad thing on my sensors

Garnet: O_O, what was the earthquake all about?

Garnet: We got to get everyone out of Treasure Town!

Garnet: Wah! How can you be sure?

[The hill nearby shook, spouting out some molten rock]

XZ: That's a fluke. Kyogre and Groudon have been dead for years. And if it's not them you give my 36 bucks.

Garnet: That is highly unlikely, and plus, don't we have a bigger problem on our hands?

XZ: Oh yeah! That Red Feather that was stolen!

XZ: Duh, The Red Feather robbery. It’s all over the news! Earthquakes will appear every few days, in different places.

(It was Moltres' feather)

Garnet: Hmmmm, I think Lightning may know something about that...

XZ: Who is this Lightning?

Garnet: The smartest Pokémon in the whole darn county!

Infinity: No, you got both of us mixed up. But, I don't do spoilers. Go ahead, ask Lightning.

Infinity: I see into time, and all of its complexity. I know all. Dialga X is my pet. I know all that has happened, and all that will happen. I have seen the beginning, the end, and everything in between. I am princess of the greatest planet, Gallifrey, which has been in existence since before this universe was created.

Garnet: [Falls down laughing] YOU? Lightning is WAY smarter than you! He can do all that stuff and more! Now let's go see THE smartest Pokémon in the county, and I mean it!!

XZ: And what about the money?

Garnet: No time for that!!

Infinity: I admire your attempts, but you're looking at the owner of your universe. That means I OWN you. I'll give you the first 36 dollars to be made, since that suits you. [Thirty-six nearly 500 year old dollars appear in one of XZ's magnet hands]

Garnet: O_O, weird. But [Points to the direction of TN's base]

XZ: Okay so now let's get serious and bust in to TN's base

Garnet: You are not busting into my base!

Garnet: A member of Team Nebula.

XZ: We need to go to the Final Dungeon

Garnet: The Final Dungeon? Isn't that just an old myth?

XZ: Nada. It's the old mountain full of rabid Pokémon.

Garnet: O_O, and I suppose at the base there is a dungeon with the infinity symbol on it?

Garnet: O_O, where the heck did you come from??

XZ: No one cares were the dungeon is we have to go search for the feather in there!

Infinity: Gosh, you rush too much, XZ. That just proves some more that you may be able to see far away, but that does not make you wise. Sometimes it is better to wait for the correct moment.

Lightning: Correct, and anyway, it's only the second part of the Roleplay! (4th Wall breaks FTW)

Garnet: Hey Dialga X, since you are like the supreme ruler of time and all, can you tell us if there is going to be another earthquake soon?

Infinity: I'm Dialga's owner, and the true master of time, but, as I said, I don't give spoilers. You may answer, Dialga.

Dialga X: Possibly. It depends on what happens. If Infinity does what I know she is going to, yes.

[Infinity sits down on a rock]

[Everyone and their belongings float in the air, preventing them from harm]

Infinity: I'm keeping you guys from being damaged. If you were to be injured from this point on, that would change the course of history. That is one of the very few spoilers I will give you.

Lightning: Whew, thanks for saving us!!

[The guild in Treasure Town collapses]

Infinity: Yes, we must get the feather before the rift breaks through our dimensional wall!

(The rift is the hell dimension, as Trudge and I know.)

Oshawott XV: What was that? It sounded bad.

[Back with the others]

Lightning: I propose we go to the Final Dungeon, Moltres' feather has been stolen you know. By my calculations the quickest route would be through the sky.

XZ: Oh no!! That means everyone in the guild is dead!

Oshawott XV: It must have came from Treasure.....Oh my gosh!!!

Garnet: But Wigglytuff has just GOT to be still alive!!

Infinity: Why do they even try? [The Magneton bursts into flames, melting it, it then hardens into the ground]

Oshawott XV: Some Pokémon never learn. There's a time bomb on the top of this dungeon that will blow up all of Pokémon-kind. We need to get to the top in a week, or all will be doomed.

(STOP MAKING PARTS!) Lightning: Seems a bit simple for a quest doesn't it?

Oshawott XV: But there are 100 floors with tons of powerful Pokémon

Infinity: Time bomb? PUH-LEASE. [The time bomb appears in front of them] All you have to do is disarm it. Simple terran technology. [She flies down to the ground and puts one arm near the bomb, it is eaten my the head on it] (She's a Hydreigon in Pokémon form.)

Infinity: Please tell me that you're kidding. [Looks] Nope. [Rolls eyes] Oh, fine. [The ground under the Nidoking explodes in water and psychic energy] That'll defeat him.

Infinity: That move should have still did him in! The psychic energy tears things apart, and of course, the water would have shorted it out! -_-' How can a water gun beat my Psychic-Waterfall-Cannon!?!?!?

Oshawott XV: You wanna get that far in my face? [Uses Razor Shell* Take that! You brain needs a body for it to stay alive.

Nidoking: [Parts fly back on]

Lightning: How the Hell did XZ die? 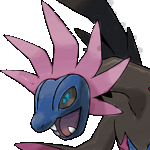 (Can you please calm down on the deaths, it isn't logical!)

Oshawott XV: Hey there's a hotel that we can stay in

Infinity: Hotel? Impossible. We're in a dungeon! You must continue, or you will be thrown out! Carry on, or the mission will fail, besides, I can give you energy. Black hole! [A small black hole opens up, sucks up energy from all the moves that flied through the air, and puts it in everyone's bodies] (Everyone feels refreshed, and like they could run through the whole dungeon without breaking a sweat.

Garnet: So which whay is this dungeon?

Star: Cmon team we need to get to the dungeon before its the end.

Sky:Really. We are stuck in this dungeon, looking for a way out!

Infinity: I froze time for a bit due to your stupidity. May we continue?

Retrieved from "https://pokemonfanon.fandom.com/wiki/Roleplay:_The_Final_Dungeon_-_The_Red_Feather?oldid=285473"
Community content is available under CC-BY-SA unless otherwise noted.