Originally, I was a pretty ambivalent Pokémon fan, but after getting back into the franchise with Pokémon Y, my fandom has been revived and remained stronger than it was ever was the past few years.

I'm currently in the midst of researching and conceptualizing my original region, based on India. This will hopefully allow me to incorporate elements that I and others have loved from previous versions of my main project while allowing me to play with something new and enjoyable.

Stay tuned for updates, both for this project and Pokémon games I've/am playing! 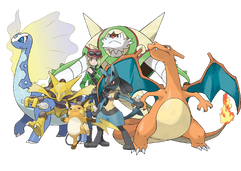 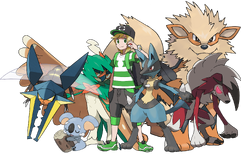 My second Alolan team, which made their debut in Pokémon Ultra Moon! The members are Arsene (Zoroark), the ever-present Aladdin (Lucario), Nascita (Sylveon), Sieg (Noivern), Hekyll (Lycanroc), and Locksley (Decidueye)!
Add a photo to this gallery
Retrieved from "https://pokemonfanon.fandom.com/wiki/User:Zeon1?oldid=437855"
Community content is available under CC-BY-SA unless otherwise noted.
FandomShop Newsletter Join Fan Lab