Trainer/photographer
one of the companions in johto

Yellow is quite naive, and acts very much like a little child.

Despite her child like nature, she can be very serious when people and places she cares about are threatened

Yellow's special skill, is Pokémon healing and is called the "Healer...

She received psychic abilities from Viridian Forest, which include the ability to read the emotions of Pokémon and heal their wounds

she moved to johto when she was young

before reuniting with charlotte & evelyn for galar

when yorika comes back the episode before, before me & evelyn head off to galar, she joins us & it's revealed that she's obtained a shiny eevee 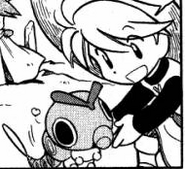 yorika, after catching kitty *she doesn't have a hat in my version* 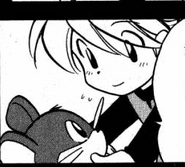 yorika, looking at ratty
Add a photo to this gallery

Retrieved from "https://pokemonfanon.fandom.com/wiki/Yorika?oldid=535816"
Community content is available under CC-BY-SA unless otherwise noted.